The 3rd Round of the Dick O’Brien Leisure League was scheduled for the 3rd March to facilitate members taking part in a sportive taking place on the 10th.

The prospects of a good turnout was not good due a change in weather conditions and prior notification from members who had holidays planned at this time. Sign on commenced at 8:45 for a 9:00 start.

A total of 6 riders signed on and one additional rider joined the group a short distance up the road. Before setting out a route map was made available for all members although by now most of the group were familiar with the route. The weather forecast was for heavy rain and low temperatures which would prove challenging as the kilometres clocked up.

Before setting out a group photo was taken by a passerby after which a short discussion took place regarding the route and weather conditions, no time for hanging about as the rain started and the low temperatures were already noticeable. 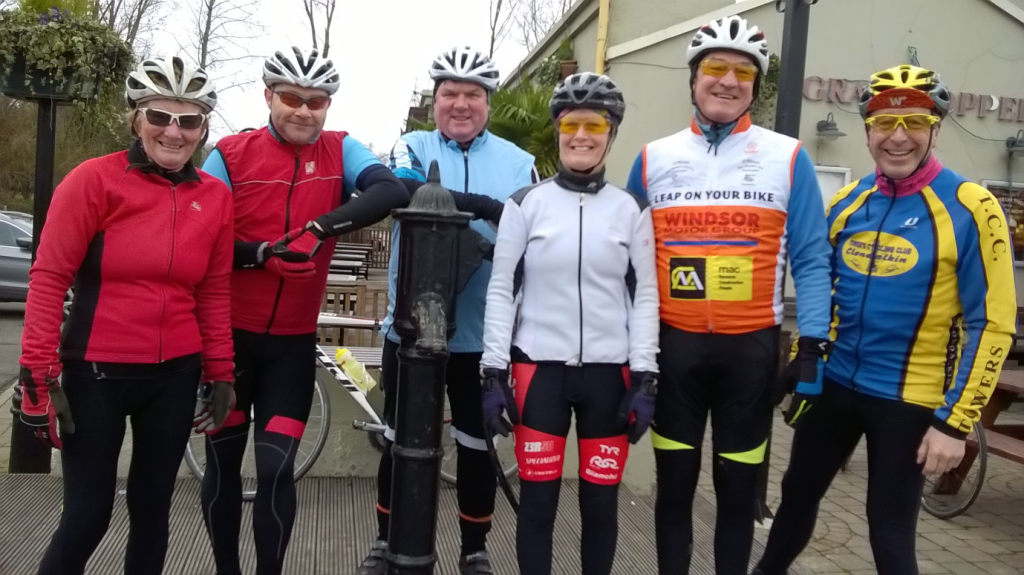 As we cycled out the group remembered Gay Farnan our touring director who passed away on the 29th March 2017 and who is always in our thoughts and especially on our tours. I was wondering if Gay was with us would he have embarked on the challenge ahead, then I remembered a tour of past when Gay was considering starting or cancelling due to weather conditions and he posed the question and the answer was “Ah sure it’s not a bad as the weather we got on the 2011 Wicklow 200 when it poured rain for eight hours solid”. Needless to say the tour went ahead.

As the tour commenced the banter focused on the weather and the route for the first few kilometres, the group then set the pace keeping everyone together heading in the direction of Dunboyne and onto Summerhill. As we approached Summerhill the rain eased a little and the decision to proceed on the net leg of the planned route was agreed.

With this in mind the group set a steady pace past the Church and proceeded in the direction of Knigntsbrook with Evelyn Doyle and Brendan Johnston on the front. As we approach the quarry climb the group stretched out a little however the decent allowed the group to take its form again and continue to the roundabout where we turned left. The riders on the front rotated to keep the pace up as the cold and heavy rain was taking its toll. The temperature starting out was 3 degrees not taking account of the wind chill and it was getting colder and colder. At this juncture the taught crossed my mind “are we polar bears are you sure we’re not polar bears” then it struck me we’re not because we were starting to freeze. (did I say it was cold). What comes to mind is that famous quote ” It was the best of times, it was the worst of times”

Back to the script……, We proceeded in the direction on Mayne where we turned left and onto Rathmullan continuing to rotate on the front to keep the pace up despite the rain. The road was getting shorter as we could smell the coffee waiting for us in Summerhill. As we approached Summerhill the group stayed together unlike other years when we had a competitive sprint finish. The group stopped in Summerhill for a well earned coffee break at the cycle friendly Londis Store. Normally we would meet other cyclists here but not today as we seemed to be the only group on the road. Thanks to quick thinking Evelyn Doyle who got a couple of old newspapers to help dry out our gloves which were soaked.(from the freezing rain).The banter was good and spirits were raised with a few jokes and hot coffee, however no hanging about and no time for a photo, the focus now was on getting back to Clonee in the shortest possible time.

Evelyn Doyle and yours truly set the pace out of Summerhill with the group catching up, the group were really feeling the cold as a result of the additional wind chill and the heavy rain. With this in mind the pace gradually increased with the strong riders rotating on the front. The pace increased to race speed for the remaining 25K and only stopping in Dunboyne at the traffic lights where the pace picked up again all the way to the finish.

All riders finished safe and refreshed with no mechanicals. A note of thanks to all who participated and in particular the unknown passerby for taking the photo.
The next tour is the Liam Horner Memorial scheduled for the 7th April at 10:00am starting in Clonee. (kindly check the IVCA web site closer to the day to confirm details)