On a windy and overcast day, this Age-Standard race came down to a sprint between a small group of 8 riders.  The tireless Sean Lally put in a tremendous ride in the windy conditions, out on his own for 75Km, and only caught in the last 4Km.  Behind him, a group of the strongest riders from other age categories had formed and worked hard together, never missing a beat, to chase down the leader.

At the line, it was Bracken who took the sprint for gold, followed by Terry Ferris in the silver medal position and Hugh David taking bronze. 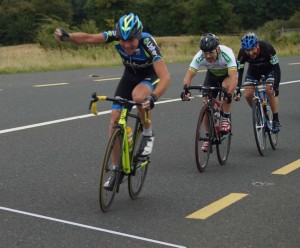